White Thaw: The Helheim Conspiracy is the third in my trilogy of thrillers. Here is a copy of the Kirkus review:

In Tag’s (Category 5, 2005, etc.) thriller, a scientist learns that Nazis are planning a return to power with an attack of worldwide proportions—and that her family in Colombia may be behind it all.

Linda Kipling’s father, on his deathbed, relays shocking news: Linda’s family fled Germany at the end of World War II. Her father was unaware of the true atrocities of the Nazi regime, but her uncle Friedrich certainly wasn’t, based on letters he’d written to Kipling’s mother. Friedrich has apparently been plotting a Nazi “comeback” for some years. Kipling makes cousins Dieter and Axel Müller nervous when she flies to Cartagena, Colombia, to see what they might know about Friedrich’s purported plan; clearly, she’s onto something big. She and Victor Silverstein, her boss at the Naval Research Laboratory in California, connect the Nazi scheme to missing NRL researchers in Greenland and a couple of NRL scientists murdered in the U.S. Friedrich’s letters hint at the plan’s catastrophic goal, and global warming may not be as natural an occurrence as people believe. It may seem that the author is setting up a preachy environmental message on climate change, but he instead dishes out a solid thriller rife with action and suspense. Parts are reminiscent of a murder mystery, as Capt. Jane Stigler of the Federal Center for Data Examination, whose former well-respected boss was one of the people killed, investigates the murders with technical director Andrew Peters. Other scenes smolder with tension, like Kipling’s trying to escape the Müllers’ compound after realizing that her cousins are no longer interested in letting her live. Anticipation is at full steam for most of the story: Dieter and Axel, who are, at least for readers, indisputably the villains, have a Plan B should their Greenland operation be discovered, and it’s even more ominous than what’s already taking place. A few of Kipling’s actions are questionable: She’s smart enough to avoid going to the NRL or home when she’s being trailed by an assassin, but she rather foolishly keeps her cellphone on—a beginner’s mistake in this day and age. Still, Kipling’s a worthy protagonist, and she and Silverstein, featured in Tag’s prior novels, may earn new fans.

Global warming is a mere plot device for this substantial thriller. 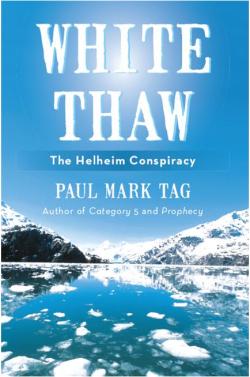 Kirkus Reviews (or Kirkus Media) is a respected American book review magazine, founded in 1933 by Virginia Kirkus (1893–1980). Click here to go directly to the Kirkus review of White Thaw: The Helheim Conspiracy.