I had the opportunity for a two-day signing at the Almaden Expressway Barnes and Noble (San Jose) this past weekend. I usually feel apprehensive before signings, this time wondering how I and my new historical novel, How Much Do You Love Me? will be received. Before long, those cares melted away. It’s such fun to talk to everyone. From the hundreds of folks I interacted with, buyers of my books ranged from a precocious seven-year old boy, all the way up to seasoned readers who have many stories to tell. Occasionally customers ask to take a picture with me.

Below, I share two photographs from this weekend. In the first, John insisted that I inscribe his book with something like “To the next best-selling author.” His enthusiasm was obvious. The second photo came about as I was closing up shop, getting ready to go home for the night. I wasn’t expecting to sell any more books when a mother (Sonia) and two daughters came by. We started a conversation that lasted some 10-15 minutes. The daughters (Sierra and Sheryl) each bought a book (one How Much? and the other White Thaw) and then asked for a photo. How could I possibly turn down an opportunity to appear in a picture standing between two young, good-looking ladies?

I would be remiss in not thanking the staff of Barnes and Noble: Jonathan, Eric, and Jeremiah helped me at one time or another.  A special thanks goes to Camille who made the signing possible and made sure all ordered books arrived in time. Ramon deserves a special shout-out. His enthusiastic, complimentary announcements over the PA system had me turning my head more than once and saying to myself, “Who’s he talking about? Is he talking about me?” 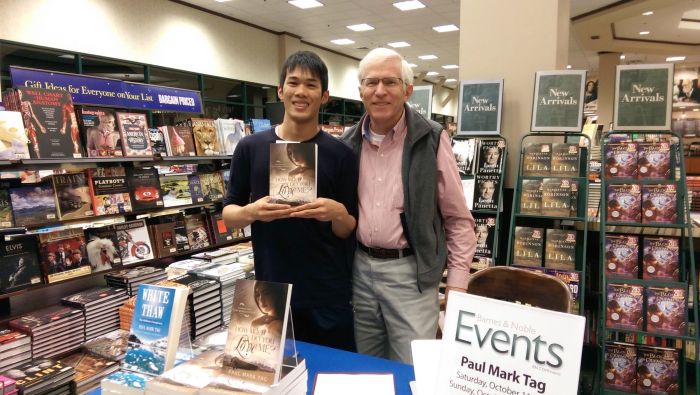 Categorised in: Category 5, How Much, News, White Thaw