This blog is Part 7 of a series discussing the internment of Japanese in the United States during World War II. This sequence is meant as an accompaniment to my historical novel, How Much Do You Love Me?

Part 6, “One Family’s Journey to their Internment Camp,” discussed one family’s journey from Bellevue, Washington, to their permanent camp in Tule Lake, California, one of ten permanent camps created for the Japanese in the United States. As bad as the internment camp experience was to become to all internees, on the way there, most internees were waylaid in what were called Assembly Centers. This delay was necessary because many of the permanent camps were not yet complete when the government ordered Japanese removed from their homes. There were fifteen assembly centers, with twelve in California and one each in three other states: Mayer, Arizona; Puyallup, Washington; Portland, Oregon. The California locations were Fresno, Marysville, Merced, Pinedale, Pomono, Sacramento, Salinas, Santa Anita, Stockton, Tanforan, Tulare, Turlock.

My fictional story covers the actual route taken by internees removed from Bellevue, Washington. That route included a stop at the Pinedale Assembly center in central California. Compared to most assembly centers, Pinedale had been built new, which wasn’t saying much, considering that the physical structures were nothing more than uninsulated barracks made miserable by the summer’s heat. Worse, some of the assembly centers were, in fact, race tracks and fairgrounds not designed for human habitation. Sanitation was a major issue at those locations. According to the Densho (see note below) Encyclopedia, internees spent an average of 3 months in assembly centers before moving on to the permanent facilities. 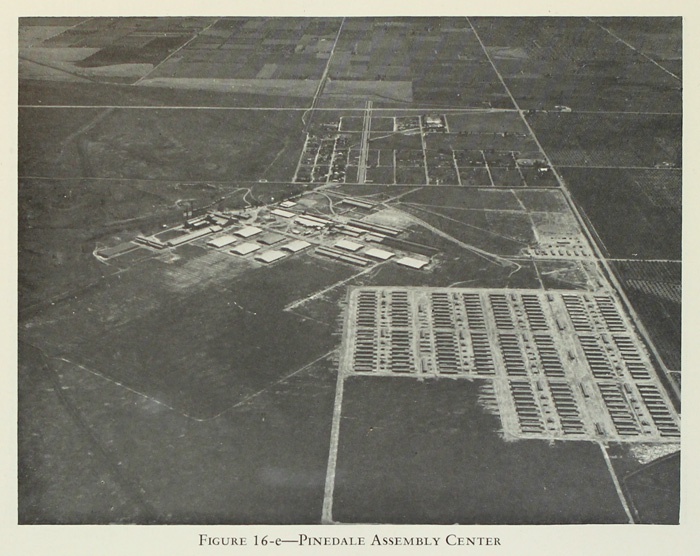 An interesting tidbit: once the internees departed Pinedale, that facility became an Army/Air Force training facility for signal technicians. A common refrain among the Japanese who later learned this: “They can have it.”

Coming up next: The Japanese Internment of World War II, Part 8: Internment in Hawaii

Previous: The Japanese Internment of World War II, Part 6: One family’s journey to their internment camp