The Japanese Internment of World War II, Part 5: Their world turned upside down

This blog is Part 5 of a series discussing the internment of Japanese in the United States during World War II. This sequence is meant as an accompaniment to my historical novel, How Much Do You Love Me?

The bombing of Pearl Harbor by Japan in December of 1941 immediately clouded the future of all West Coast Japanese in the United States. Fear and racism abounded, and less than three months later, President Roosevelt signed Executive Order 9066, which led to the internment of 120,000 Japanese men, women, and children into camps. My book follows the plight of one such family from Bellevue, Washington. 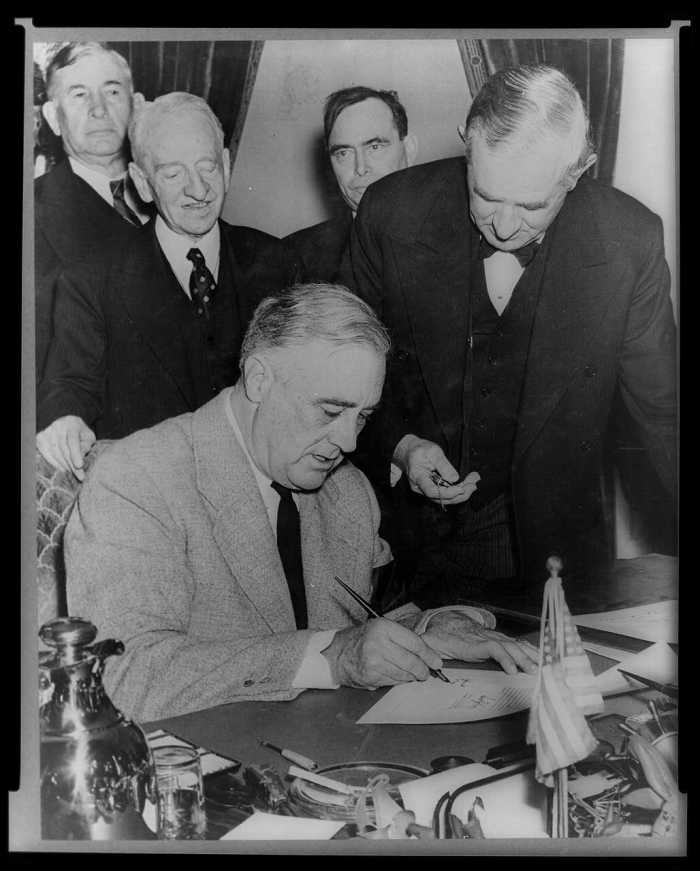 President Roosevelt signed Executive Order 9066 on February 19, 1942.  In this photo, courtesy of the Library of Congress, Roosevelt signs a declaration of war against Germany on December 11, 1941.

It is hard to imagine something like this happening today, but it happened in the United States in 1942. At the time, there was a law that prevented Asian aliens (those not born in the United States), such as the Japanese, from owning land. For that reason, Japanese families often put land they purchased into the names of their children, if they had any. These families were better off than most, who when they were ordered to leave their rented homes, had nowhere to store their belongings. A few had Caucasian friends who offered to store their household goods until they came back. Those were the exceptions. Limited to one suitcase and one duffel bag per family, everything else had to be sold or given away. Good furniture and appliances went for practically nothing. But besides personal possessions, can you imagine the turmoil created by leaving jobs and, for students, having to discontinue studies in the middle of a school year?

The Japanese made the best of an impossible situation. To no avail, the Japanese emphasized their patriotism, buying war bonds, for example. Young Japanese males–bona fide American citizens–volunteered to join the service; but because they were part of an excluded group, they were turned away. (As will be discussed in another segment, this decision was later reversed.)

The above  photograph (again, courtesy of the Library of Congress) is a good example epitomizing what happened. Here is a picture of a Japanese storefront, marketing fruits and vegetables. Across the front is a sign stating, “I am an American.” The owner has done his best to proclaim his allegiance to the United States. But above the store a second sign makes clear to everyone that his proclamation of patriotism has fallen on deaf ears. He has had to sell his store, probably for pennies on the dollar.

Up next: The Japanese Internment of World War II, Part 6: One family’s journey to their internment camp