This series of blogs is being published to coincide with the release of my historical novel, How Much Do You Love Me? Parts 1 and 2 covered the pre-war situation for Japanese Americans and the bombing of Pearl Harbor. Part 3 covers what happened following Pearl Harbor.

Pearl Harbor immediately ratcheted  up ill feelings toward the Japanese, most of whom lived along the West Coast. The building animosity and controversy concerning the Japanese  played itself out in newspaper columns and editorials. From day to day, the future of the Japanese seemed to hang between what the government thought was best for the country and current popular opinion. Contrary to prevailing opinion, there was little concern among the military or the FBI with regard to either a West Coast Japanese invasion or spying by Japanese locals. Even J. Edgar Hoover, the director of the FBI, shared that view.

It was a host of lower-level officials who kept fomenting hysteria, reporting incidents involving Japanese submarines lurking along the coast, enemy planes plying the eastern Pacific, and various other implausible incidents in which the Japanese were supposedly providing aid for an expected invasion. None of these reports was ever proven in fact, but politicians and others who harbored anti-Japanese sentiments referenced them repeatedly as if they were true. 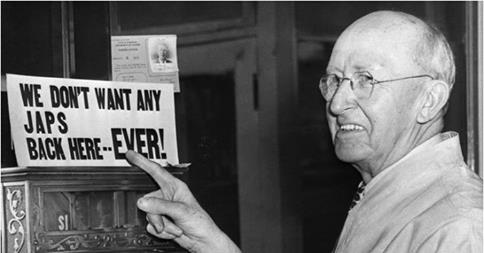 Please see note below regarding Densho, the source for this photograph.

Racism also played a part. For example, much of the Seattle, Washington area’s fresh produce came from Japanese truck farms. A letter to the editor by Charlotte Drysdale of Seattle is pertinent: “We had gardens long before the Japs were imported about the turn of the century, to work for a very low wage (a move for which we are still paying dearly) and we can have them after we have no Japs.”

To be fair, not everyone joined the bandwagon, particularly at the local level. Churches, in particular, stood up for the Japanese. One organization that promoted the Japanese point of view was the Japanese American Citizens League (JACL). Many JACL members purchased Defense Bonds as a demonstration of good faith.

But, public opinion and hysteria swayed government action, which came to a head on February 19, 1942.

Up next: The Japanese Internment of World War II, Part 4: Executive Order 9066