Stories from My Life, #6: To Russia with Love 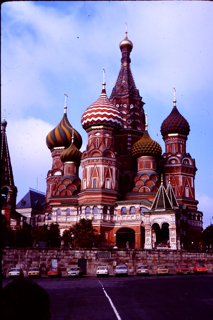 Becky and I married on the 12th of August in 1984. As serendipity would have it, a few weeks later, I was scheduled to attend the 9th International Cloud Physics Conference in Tallinn, Estonia. As you recall, 1984 was still five years away from the fall of the Berlin Wall in 1989 and the beginning of the breakup of the USSR that led to Estonia’s independence in 1991. Looking back, we had a unique opportunity to experience the effects of communism first hand. And so, with opportunity in hand, Becky joined me in Helsinki; from there we ferried across the Gulf of Finland to Tallinn. After the conference, we extended our trip for two weeks to visit Leningrad (now St. Petersburg) and Moscow. The purpose of this blog is to provide a few reflections from that trip.

At the conference I presented a paper entitled “A Numerical Simulation of Stratus Breakup.” Steve Payne, my colleague from Monterey, was co-author. Below you see a picture of yours truly (in front of my poster) obviously making some astute comment to another conference participant. Although Becky spent time touring the city while I attended the conference, she did attend a session or two. She told me that her most memorable moment was the session on Nuclear Winter, where scientists discussed the expected atmospheric effects resulting from an all-out nuclear war between the U.S. and the USSR. She remembers a solemn gathering where the west and east somberly pondered the utter catastrophe that would result from such an event. 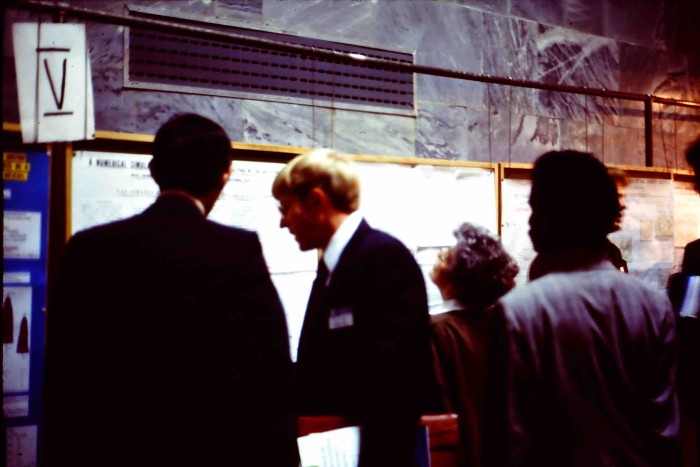 Probably our most memorable moment (in Tallinn) outside the conference was an evening dinner we had with another colleague, a friend of mine, David Johnson. Becky was determined that we experience at least one dinner outside our hotel. She had painstakingly (involving an inordinate amount of time interacting with Intourist, the official Russian travel agency) made a reservation at a local restaurant at which we arrived with paper voucher in hand. Security at the door was such that Becky had to block it open using her shoe and then shove the paper reservation into the face of the proprietor. Once inside, we discovered beautifully set tables, each with hors d’oeuvres to eat. But what we quickly learned was that very few menu items were available and that the proper question we should have asked was, “What do you recommend tonight?”

Our above experience represented the tip of the iceberg in a Soviet society that allowed nary a trace of capitalism. The contrast between Helsinki and Tallinn, only a ferry ride apart, was remarkable. For example, in Helsinki on the docks were fish vendors, selling—what else—fresh fish. On the Tallinn side, there wasn’t a fresh fish to be found. All fish for sale had previously been salted at sea. There are a few descriptive adjectives that convey the differences we sensed between Helsinki and Tallinn: bright, cheerful, and vibrant compared to colorless, unhappy, and dull. It was a revelation.

We next trained to Leningrad (now St. Petersburg) where we stayed in a “western” hotel. Our most memorable impression there had to do with the Soviet society’s appreciation for those lost in war. And you can understand why. Consider World War II: the United States suffered 419,400 fatalities, 0.3% of our population, according to Wikipedia. IN COMPARISON, the Soviet Union lost about 24,000,000 (figures above and below are quoted, but they’re all horrendously high), a staggering 14%! The photograph below shows a newly married couple placing flowers at a war monument. We saw this type of activity occur over and over again. 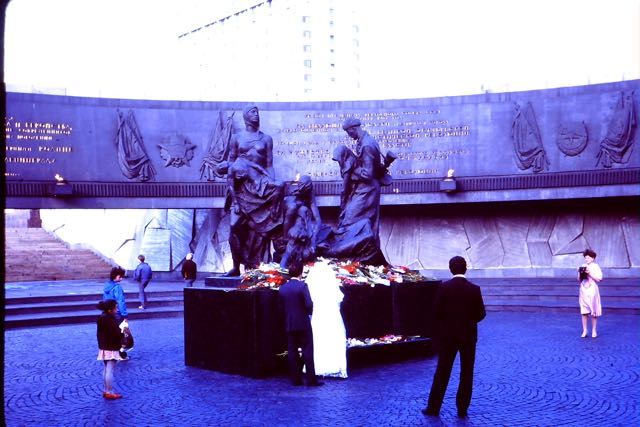 Following Leningrad, we trained onward to Moscow. The joke among our tourist group was that our rooms were bugged and that we were being followed. This suspicion was belied somewhat when our Russian guide turned us loose in the center of Moscow, ordering us to find our way back to our hotel by ourselves. That wasn’t hard because of their excellent subway system. We imagined the mischief we could have gotten ourselves into by playing spy.

Looking back, our trip was memorable and educational. In 1984, we came away with two primary conclusions. First, the Russians were no different than we are; they are a proud people who had suffered greatly from the effects of World War II. And second, compared to the opportunities we enjoy in a democratic and capitalistic society, communism exerted an ever-present drag on individual expression and achievement.

If you have any questions or comments, please e-mail me at tag@peoplepc.com.

Upcoming: Stories from my life, #7: I pay a price for ignoring my moral compass

Previous: Stories from my life, #5: Close encounters with the grim reaper