Stories from My Life, #9: The memory is old and faint—am I only imagining that I once stood in the audience of President John F. Kennedy? 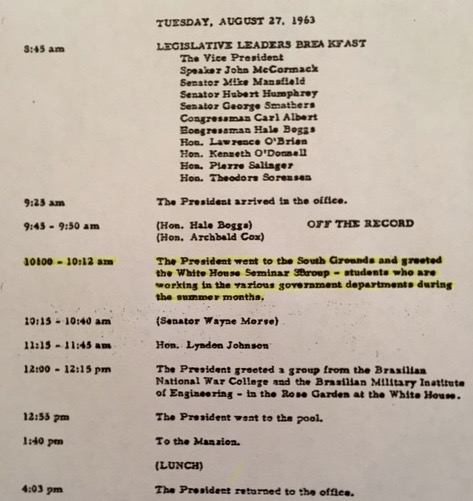 I remember the setting, the White House lawn. I stood only feet from the 35th President of the United States—and he spoke to me. It was in the morning.

Have you ever stumbled across a memory so old that you begin to question whether it actually happened?

The year was 1963, and I had just graduated from high school in Somerset, Pennsylvania. I would be starting college that fall at Pennsylvania State University—a big deal for my family because I would be the first to go to college.

But during that intervening summer, thanks to my father, I had the first of a four-year summer job stint working for the federal government. I had been accepted as a Student Trainee for the Weather Bureau, as the National Weather Service was called back then. This opportunity meshed perfectly with my planned major at Penn State: meteorology.

I remember riding a bus to Washington, DC, my first assignment, the Weather Bureau’s original main office at 24th and M Street. All I had going for me was an address where a relative said that I could rent a room. For a week or so, I walked the couple miles to work, the stifling city heat leaving me soaked with perspiration at the end of each day. To my surprise, it wasn’t long before my handlers realized that they had nothing for me to do. Off they sent me to the Sterling Observational Test and Development Center, adjacent to Dulles Airport, which President Kennedy had dedicated only the previous November. For the remainder of that summer, I left my distinctive mark on the city—I painted every weather shelter within driving distance.

Enough background. Sometime during that summer, I remember being invited, along with other students, to the White House to be addressed by President Kennedy. I recall standing not far from him. Trouble was, I hadn’t revisited this memory in decades and was worried that my imagination had gotten the better of me. I had no proof to document this significant event: no diary notation or pictures. One person who I think was there with me that summer was my roommate, Doug Downen. Sadly, he passed away recently.

Determined to prove that I had not lost my mind, I took to the Internet. Some three hours later I struck pay dirt, the personal diaries of President Kennedy. My cherished reminiscence occurred on the 27th of August, and you see above a copy of the first page for that day. It says that between 10:00 and 10:12 that morning, “The President went to the South Grounds and greeted The White House Seminar Group – students who are working in the various governmental departments during the summer months.”

At Penn State less than three months later, I found myself walking to a swimming class when I heard a radio blaring from a window. I soon learned that our President had been shot. Shortly thereafter, while we were in the water, our instructor told us to go home. President Kennedy had died. I can still remember the absolute silence that consumed the venue.

Upcoming: Stories from my life, #10: A thank-you note on my wife’s birthday