Ode to my grandpa 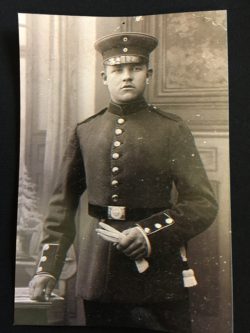 Grandpa left his German home by nighttime dew, spiriting away his young bride and infant daughter, my Aunt Sue, sailing far across the ocean blue, to America new. As they departed the scene, the year was 1913, a year before the continent unleashed its war machine. Their ancestral home soon a memory, my grandparents chose Pennsylvania as complementary.

The ensuing family of six worked the family farm true, with Grandpa toiling in coalmines, too. Although the 1919 flu left him with no hair, worse still was World War II taking his number two heir, laying the family’s emotions bare. But ever a Christian–if he were to succumb, he looked forward to heaven and kingdom come.

Living alone with my grandparents as if a son, I learned much important under the sun, and how soda pop stings noses for fun. And Grandpa knew how to eat potatoes right, a big slab of butter with each bite.

After Grandma died early, Grandpa lived alone, because that same autumn Mom recovered her loan. My mother—his daughter—had remarried, you see, and we came together as a family.

I look back and wonder how lonely he must have been. I know I would have been, if I had been him.

But full reflection on this history makes me fathom its core, that had he delayed just one year more, you’d never be reading this bit of lore.

But about whom am I talking? You now will learn. My grandpa’s name was Frederick Kern.