My current web site has been around since 2007. Created by Monkey C Media (Jeniffer Thompson) out of San Diego, it was thoughtfully created and has served me well. However, over the past year, a friend of mine* who shall remain nameless (out of fear of retribution) has told me that it looks dated. To cover up the fact that she might actually be right, I naturally pooh-poohed such talk. However, by the end of 2013, I began to succumb to her thinking. In addition, as I looked forward to the August release of How Much Do You Love Me? I wanted a new and exciting platform from which to launch the book.

I searched first for local talent—and I’m glad I did! I stumbled across the creative duo of Dr. Edward Barker and Nancy Brennan (see accompanying photo). 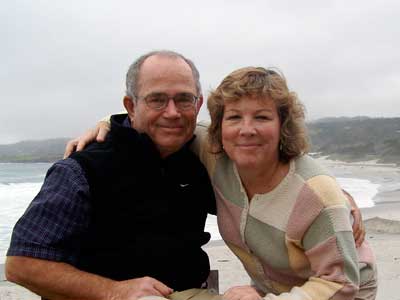 Their company, Monterey eSolutions, has been around since about 2008. I had admired some of their handiwork, including that for a new children’s park in Salinas. I told Ed and Nancy that I wanted something that looked beautiful and that did everything my old web site did. More important, though, I told them I wanted a site that had glitz and gee whiz written all over it. I know that comes across as superficial and shallow, but I can be that way. I’ll never forget Ed’s thought-provoking response: “No Problem.” Of course, I wasn’t sure that he and Nancy realized how hard it would be to please a Virgo who takes few prisoners.

Even before the ink had time to dry on our 27 January contract, we hit the ground running, when Ed barked** out his first order. “First, I want you to look at other authors’ web sites and tell us what you like and what you don’t like.” In response, we ended up benchmarking more than a dozen sites of popular authors. A quality that appealed to all of us was the simplicity of that of author Scott Turow.

I’ll cut to the chase. Ed and Nancy have been working continuously since January, and my new web site will make its debut in a week or so. Elegantly simple and simultaneously beautiful, it nonetheless incorporates state-of-the-art attributes that I was hoping for: slide show, flipping book covers, and a “Look Inside” (the book) feature that duplicates not only the book’s visual pages but also provides audible transcriptions.

In summary, I can honestly say that I never expected this project to work out as well as it has. Stay alert for the grand opening!

* Her initials are BT, and she lives in my house.
** An appropriate choice of verb considering Ed’s last name.