A luncheon date with Joel Myers

Once upon a time, a half century ago, fresh out of high school, I began my study of meteorology at Pennsylvania State University. Compared to many, my professional growth was relatively boring; I majored in meteorology from the start and never deviated from that professional track. I worked for the same research facility over a period of thirty-some years. Only after I retired, did I change careers, to 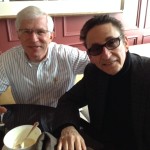 A month or so back an e-mail exchange put me in touch with one of my first instructors at Penn State, circa 1966. He taught Synoptic Meteorology. In our laboratory sessions, we hand-drew weather maps to understand high and low pressure systems and their development. The process these days is highly automated, but these same charts are among what we see on the evening news.

That instructor was Joel Myers. Joel was a research assistant around that time, only a few years older than I. Even though we students were naïve newbies, I remember him treating us with respect and dedication—even while he tolerated my good friend Marian Peleski and me acting like juveniles: blowing erasure crumbs back and forth across our drawing tables (early on, we spent as much time erasing as we did drawing).

I returned Joel’s e-mail and suggested that if he ever found himself on the West Coast, to look me up. He wrote back and said he would. Truth be told, I never expected to hear from him again. To my surprise, several months later I received an e-mail from his secretary giving me a time window when he would be in nearby San Francisco. Long story short, last week, my wife, Becky, and I had lunch with him in the City.

So why is a luncheon with a fellow meteorologist—whom I haven’t seen in decades—so unusual that I write a blog? Because Joel Myers is a very special meteorologist indeed; he is one of our field’s superstars. Most of you have probably heard of AccuWeather. Joel is the Founder, President, and Chairman of a company (headquartered in State College, outside Penn State) that employs more than 400 people, serves 60,000 clients, and produces a web site accessed by eight million users. But beyond his business success, he has given back significantly to the university that gave him his start—financially and with his time. He has served on the Penn State Board of Trustees since 1981: that’s over thirty years, folks!  He tells me that he is running for one last term on the Board, and I hope that he’s successful.

So, you ask me, what was it like to sit down to lunch with someone Entrepreneur Magazine lists as one of the 528 greatest entrepreneurs in American history?  Truly, I can say that it didn’t feel that much different from the first day he walked into our meteorology class. His distinctive voice resonated the same, and he didn’t look that much different. He asked me questions and treated me with the same respect that he had so long ago. Because the story revolves around climate change, I gave him a copy of my latest thriller, White Thaw: The Helheim Conspiracy.

Being the sentimental person I am, I valued that get-together. My wife got to meet Joel, and I was reacquainted with someone I respected at the time and feel lucky to still know today. That he took the time to sit down with a former lowly undergraduate from nearly a lifetime ago meant a lot to me.